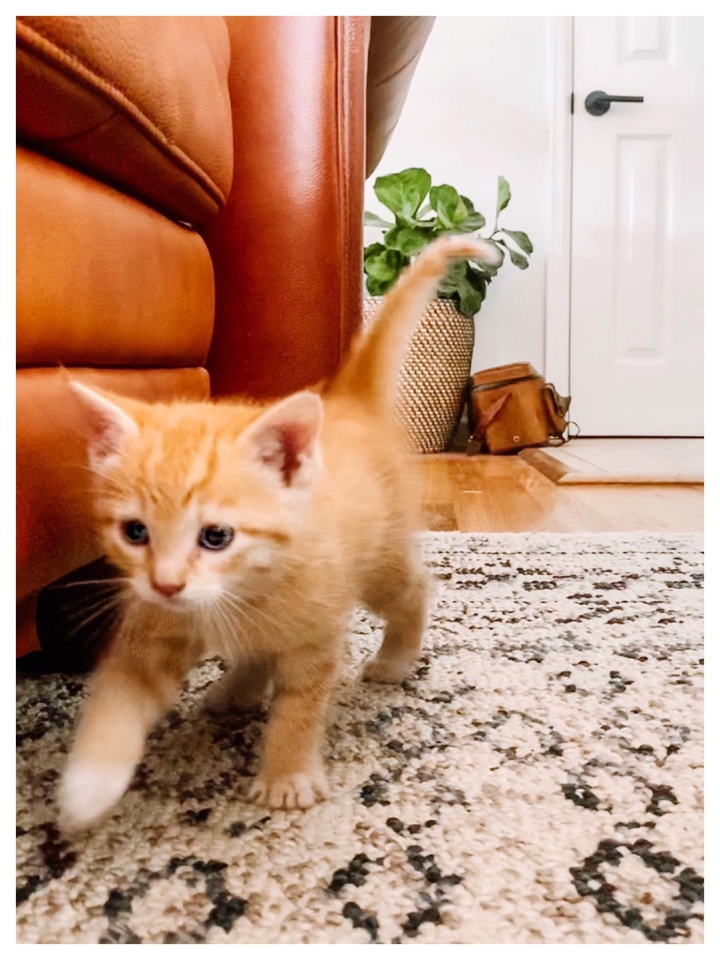 Meet Pumpkin! We surprised ourselves and the kids last night with our first family pet.

After we moved to our new property which just under 3 acres, we decided we would most likely get a dog or two. Then some chickens, maybe a couple goats. The last animal we would ever consider? A cat. We are NOT cat people.

A few weekends ago, Johnny moved a pile of rocks from the side of the house which had been left by the previous owner. Since then, we’ve got a mouse problem. I really should write an entire post about my most recent mouse experience. You can look for that coming soon..

Four hours after said experience, I got a text from Johnny. It was simply a link to a craigslist listing for 8 week old kittens. Okay. Maybe getting a barn cat would help with the mouse problem. The listing was for two calicos and two tabbies. My first though was, “Are you serious right now? You hate cats more than you love dogs. And you loooove dogs.” But this was my response. WHO AM I?!

Well, to my surprise, he said he would stop by the cat house on his way home from work. We had decided on the cute black and white one. I mean, fine. Her coloring was super cute. Had we really just had that conversation? Again, we’re NOT cat people. As he got to the home, he approached her and she let out a hateful hiss. “I’ll take the tabby!”

I knew he was almost home with this giant surprise, but the kids were clueless. Dixie has begged and pleaded for a cat since she was age 2. Did I mention we are not cat people? When he turned down our long driveway I yelled for the kids to come out and greet him in our usual way: the dad’s-home-dance. We rushed out, planted our feet in front of the garage and boogied until he was parked. I know it’s a silly tradition but makes for a fun memory. As he got out of the car, they headed for him for their welcome home hugs. He knelt down, opened his sweatshirt, and BAM. An 8 week old orange tabby. They were completely shocked. So much so that Boone let out, “What is that?” (I did hear on the radio that yesterday was National Stupid Question Day. #truestory)

Having nothing but this baby cat and some dry food my mother in law brought over (she was in on the surprise and came to see their reactions), we headed to Walmart for a litter box and all the other stuff google told me I needed. Seriously, if you could see my google history you’d laugh at my cat-ignorant questions.

Those close to me still think I’m nuts. My gf Gena responded to the we’re-getting-a-cat text with nothing but, “stop.” Not sure if I’ve said it yet but, I don’t like cats and Johnny hates them.

I’m pleased to announce that is no longer the case and everyone is in love…except for maybe the couch, who is already pretty annoyed with him.